Vanessa DeRado is a four-year varsity center back at Fort Mill High School in Fort Mill, South Carolina. She was named a team captain her junior season. In 2017 she earned All Region as a Freshman and in 2019 earned All Region, All Area and Defensive Player of the Year for Fort Mill HS and Viking Cup All Tournament Team. Vanessa is the captain of the 01 CSA Palmetto King club soccer team for 5 seasons and played two years for the 01 SC ODP girls team.

Academically, Vanessa maintains over a 3.75 GPA while taking several Honors, AP and Dual Enrollment level classes. She is involved in BETA Club, Young Life and actively volunteers for Keystone Substance Abuse, Rock Hill Attention Home and the YMCA as a youth soccer coach. In her spare time, Vanessa enjoys sports, reading and health science. Her parents are Joe and Donna DeRado and she has two older brothers, Joey and Michael.

Faith Knoedler is a midfielder at Columbus High School in Columbus, Georgia. She will be graduating from Columbus High School class of 2020. Faith has two sisters, Karis and Necia. A military family, the Knoedlers have lived in 7 different states over the years. Outside of soccer she likes doing anything active, but her favorite thing to do is be on the lake. Faith has played varsity soccer all four years of high school as well as three years of varsity basketball. Playing in Kansas her freshman year, she received the All-Sunflower League honorable mention. During her junior year, Columbia High School made the final four of state playoffs. Individually, Faith was named 1st Team All-League.

Abby Mayer is a forward at Person High School in Roxboro, North Carolina, where she has been a 4 year starter on the Women's Varsity Soccer Team. Abby has received all-conference honors every year she has played and has consistently been one of the top goal scorers in her conference, reaching her 50th career goal early in her Junior season. Abby received the Most Outstanding Women's Soccer Player award her Freshman and Junior year as well as being selected by coaches to receive the Excellence in Athletics Award her junior year. Abby has served as a captain for both her High School and Club teams. Abby has been a member of the Premier UK Elite soccer team and was able to train with her team for the past two summers in England.

Off the field Abby has excelled in her academics and was inducted into the National Honor Society her Sophomore year.  Abby has volunteered at the local elementary schools supporting teachers and reading with students as well as serving as a coach for a boys U8 soccer team.  Abby was a member of the Cross Country Team her Freshman and Sophomore years. Abby was also voted by her peers to represent her class on the Homecoming Court both her Sophomore and Senior year.

Outside of school and sports, Abby has a very close relationship with her parents, Mindy and Marcus Mayer, as well as her three older siblings, Jordan, Matthew, and Caitlyn Mayer. Abby also loves hanging out with her friends, traveling, working out, and of course playing with her five dogs named Bella, Mikey, Rhaegar, Lucky, and Buddy. Abby also has a job at Palace Pointe where she serves a Lead Role in the Theater department.

Molly Platt is a defender at Central Dauphin High School in Harrisburg, Pennsylvania. Central Dauphin had a highly successful year in 2019, finishing 10-1-2 overall. She also plays for the HMMS Eagle FC club team and participated in the Eastern Pennsylvania OD program.

Off the field, Molly is a member of the yearbook staff, four diamonds, key club, EDGE youth group, and 30 hour famine participant. She also volunteers to help out with the Special Olympics.

Karter Ronne has been a four-year forward at Bloomingdale Senior High School in Valrico, Florida. In her senior year, she was named captain of the Lady Bulls team. In 2017, 2018, and 2019, her team won the District Championship title. In her junior year, Karter was one of the top scorers for the team and was the only player in her district to score against Bloomingdale's rival, Newsome High School. On the club side, Karter previously played for the West Florida Flames NPL and Pre-DA 00 and 01 Women's team for three seasons. She is currently captain in her first season with the Tampa Dynamo FC Elite U18/U19 Women's team. As captain of both teams, Karter initiated and led team prayers before games.

Off the field, Karter maintains a 5.3 weighted GPA. She has excelled in honors, AP, and Dual Enrollment classes. She is also a member of the National Honors Society, Class of 2020 Steering Committee, and the Save Promise Club. Karter has volunteered as a camp counselor at Camp Sozo, which offers free summer camps to kids living in troubled and impoverish homes in the Ocala National Forest and was a leader/mentor for the "IncrediBulls" Special Olympics Event for kids with special needs. She also volunteers as a leader in her church's children's ministry. Karter has a very strong relationship with her loving family, including her two younger sisters (Maggie and Abby), her Mom (Sarah), and her Dad (Erik).

Elaniee Sprinkle is a defender at Boiling Springs High School in Boiling Springs, South Carolina. Elaniee's accomplishments on the field include SC 5A All-Region, a three-year Varsity Soccer Letterman, Varsity Soccer Captain in 2018 and 2019, winner of the 2019 Boiling Springs High School Top Points Award, and a three-time player of the game. She also played for the Carolina Football Club, which comes off a Fall 2019 SCSCL U-19 Championship. This summer, Elaniee played for the GPS Upstate, a member of the 2019 Global Premiere Soccer Summer League. Upstate went on to win the 2019 GPS Upstate Elite 02 Southeastern Championship and was a 2019 US Club Soccer National Cup XVIII Participant.

Off the field, Elaniee strives to make Jesus first in her life and exemplify Him in all she does. A middle child of 7 children, she enjoys spending time with her family and friends. Her life verse is Proverbs 3:5-6 - "Trust in the Lord with all your heart and do not rely on your own understanding.  Think about Him in all your ways and He will guide you on the right path.” 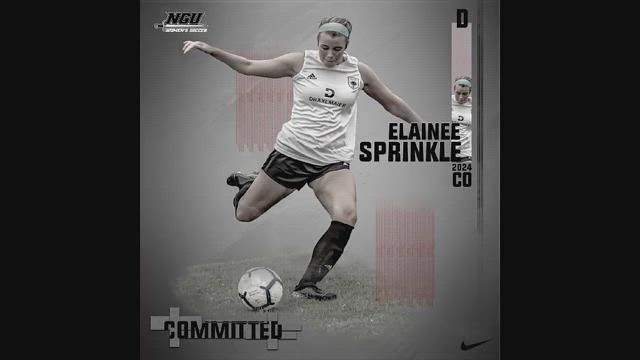